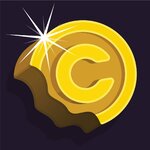 Coins are the main currency of Box Critters. Players earn 20 coins when logging in each day.

The coin bar design was changed on August 2, after RocketSnail shared an image of a half-bitten coin on Twitter and said that he might nickname the coins "bite-coins".[1]

Players were able to earn coins for the first time on November 20, 2019 during the Battle Bears event. 20 coins were earned for every Huggable shot. This was the first time coins could be earned and was the first "microgame" to be added to Box Critters.